Unless you have been locked up over the past 4 weeks you will have watched the build up and party leaders debates. Many people are tiered of the election process feeling it has gone on for too long. The countless polls being quoted showing the popularity of the individual parties going into the final stages of the campaigns.

One interesting poll is one that google has released via there homepage that shows the popularity of the leaders on searches on google. It certainly is very interesting and the graphs adds to the trend from the live leaders debates you can see a clear lift in the graph where Nick Clegg rose from obscurity.

Interesting is the massive number of searches Gordon Brown receives now is this a result of the pensioner in Rochdale that was called a “biggot” it could well be but getting close to the polling day could it show Gordons popularity coming through. The viral marketing as a result of the rochdale pensioner could very well of had a positive result in my opinion.

The party searches Labour, Conservatives and Liberal Democrats emphasise the opinion polls from mori and the likes. A hung Parliament could very well be on the cards if Google searches are anything to go by. An interesting leap for the liberal democrats close to polling day could show an interesting swing of votes perhaps. 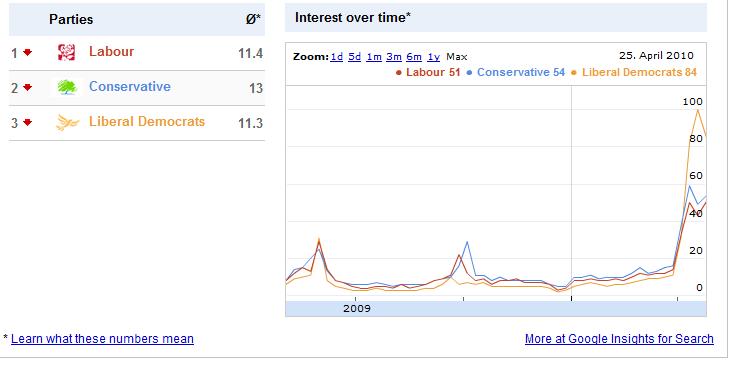