Google have launched there new add on to Google maps you can now view street level in 3D. Warning 3D glasses are required and unless you still have a pair from the 3d cartoon annual your received in 1988 (aged 5) you will be like the majority requiring a new pair. I have not yet tested the street view in 3D but you can clearly see without glasses there is a definate 3D view created when you click on the icon that represents the 3D view. One can only presume that at the time of photography the camera used for google maps street view took a 3D image. I am no expert when it comes to what is required to create the 3D image but from what I seem to remember it has something to do with the green and red colours and two images being taken.

Please note rumours online are that this could have been a April fools joke with the timing of the launch but the feature still remains and I cannot see this being a prank.

Before the Change the icon displays a grumpy chap with blue and red glasses above his head,

After the change the glasses are added leaving a happy yellow chappy,

It seems 3D technology is here to stay this time.

If Google have added this 3D with prior planning then this is a very clever move 3D is the next HD if you catch my drift. Sky sports are already screening a number of Premier League football games at selected Pubs across the UK in 3D it is surley only a matter of time before high street TV shops and mainstream brands together with sky cash in on this new technology. I say new technology but 3D was for me something of the 1970 and 80s that never really took off. Flimsy glasses made of card were used but technology has progressed real life live events in 3D is a totally different kettle of fish indeed.

So visit google maps order some 3D glasses and away you go take a look at some famous landmarks if its that good perhaps some people will stop travelling and remain rooted in front of there laptop screen permenantly .

That was a joke by way. 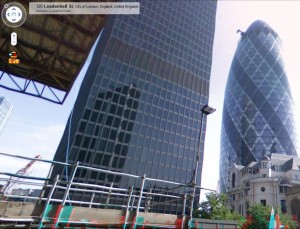