Published by Garry Pickles+ on December 3, 2012 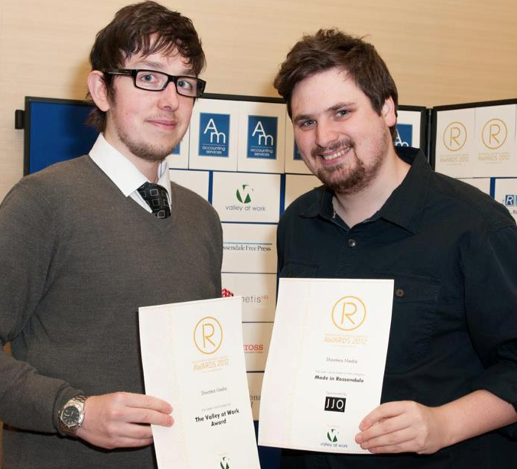 Paul Sparks and Paul Coppack at Shooters Media picking up another award.

We caught up with Paul Coppack now based in Bacup and still pushing Shooters media more than ever and expanding into lots of exciting new areas.

Ever wondered what it is like to push a media company in the Rossendale Valley ?

1. How long have you been in business and what exactly do you do ?

I have been the owner of Shooters Media since 2009, Shooters is a video production company specialising in corporate and promotional videos. The wedding videos we create are under the name toast-film.co.uk

2. Have you always run your own business and would you class yourself as an entrepreneur ?

The company initially started with friends who I went to university with. After about two years, we eventually separated and pursued different ventures and I took the company forwards myself. I don’t really consider myself as an entrepreneur, in fact, the business side of my work I find dull and boring… if I could, I’d rather work for creativity and enjoyment of it… but I need to be realistic, until my lottery numbers come in.

3. How do you see social media playing a part in your business in the future ?

It’s obvious that is the way forwards and it has been for the last few years or so. A lot of our work comes from word of mouth, recommendations and social networking.

4. How do you see social media playing a positive part in the local community  ?

In my local area, I don’t think the authorities use social media to their advantage. It’s frustrating reading about events in the press that interest me after they actually happened.

Although we don’t specialise in social networking, with the help of our contacts we work on it in-house. We made mock-up DVD sleeves of previous projects and tagged the relevant clients. Their customers and contacts shared and commented on our artwork with their Facebook friends and their was a spike in new likes on the Shooters Media Facebook page. The positive comments also resulted in new enquiries.